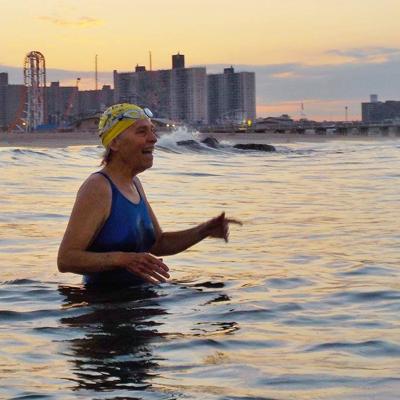 Paige Churchman was never the same after her first swim at Grimaldo’s Chair. She stepped into the water as a retired Citigroup VP thinking, “I wanna swim across Lake Champlain. But laps at the Y ain’t gonna do it.” So here she was at a CIBBOWS clinic in 2016 wondering if she was good enough. Were these serious athletes who would roll their eyes at an old newbie? So she donned the cap with the CIBBOWS mermaid and listened to Lesa about testing the current and knowing your landmarks and to Sil about the femoral artery and the deep dive response and breathing slowly.  And then they were all in the water being lifted and dropped by the waves. She felt the pull of the tide coming in, and something deep inside stirred awake. And that was it. By the way, she made it across Lake Champlain.

Every dollar helps us to keep putting on great events.